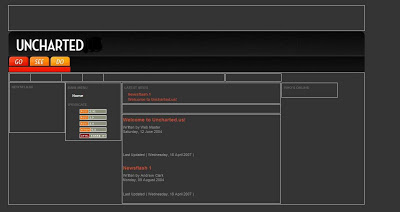 Now the tough part… programming! We’ve been discovering how cool it is to come up with great ideas, but also how painfully challenging it is to translate those ideas into reality. Especially with some of the challenges Joomla presents to the non-techies on the team (ahem.. that would be me). The learning curve is steep but everyday we’re making progress bit by bit. Sweet persistence.

Our programmer is the bread and our designer is the butter of this creation. (Note – our designer would really dig that analogy since he is a food maniac and we’re all expecting he’ll be our lead contributor to the food section.) Our fate rests in their hands! I’m sure they’ll introduce themselves here eventually, but for right now they are pretty busy plugging away and its no easy task.

Here’s their first concept for the framework of the new design. Nostalgic! We’ve already improved upon this, but we’re mostly sticking with what you see as the foundation.

Now just imagine all the spaces filled with picturesque scenes of mountains, trails, ski slopes and off the beaten path surprises, and bam! You have a better idea what it will look like. I know, I know. Pretty lame to ask you to imagine. All I can say is its coming and I’m just as anxious as you, and hey, I didn’t have to post any of this to start with.