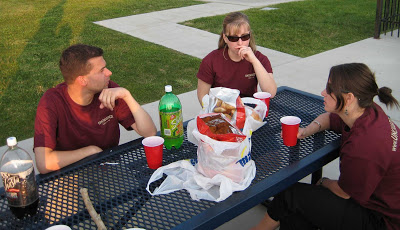 One thing you might not know about Uncharted is that we are a small team spread all over the U.S., and sometimes even all over the world. Not only do we have team members in Michigan, Idaho, Texas, and Utah, but there have even been times when some of our team members were in Mexico, Europe, Asia, and the Middle East. Yet somehow we’ve been able to make it through all the crackled audio during our web video conferences. Somehow we’ve made it through flurries of e-mails. Somehow we’ve pressed on through online chat sessions full of miscommunicated meanings. And somehow, on June 14th, 2008, we managed to scrape up some funding from who knows where to come back to Logan, UT, where the idea of Uncharted was born. Our purpose? Simple: to see and help each other through a retreat and practical workshops. Oh yes – and to make plans for the new Uncharted site which is about to be released.

We had a blast. It seems like everyone’s favorite parts were: 1) seeing the new designs our Design guru Andrew has crafted and 2) being surprised with our first business cards and t-shirts, thanks to the Communications & Marketing team. Heck, it was just great to see everyone, which was probably the most important part. It’s such a rare occasion to have everyone together.

So what? So we got together. What now? Well, one of the best parts about this retreat is that we all came away with better journalism, photo, web, leadership, and communication skills. Plus, we have a very clear plan of attack for implementing the new Uncharted site. In fact, we’ve been so busy implementing, I haven’t even had time to post this until now. This new site will make several improvements in functionality based on the feedback we may have received from you, as well as our own vision for what Uncharted can offer the world.

Here’s a run down on what to expect with the new site:

And that’s just a brief summary. The new site looks so cool it nearly made me jerk some tears of joy when we were looking at Andrew’s presentation. Our vision is quickly turning into reality. Even though our website and first printed magazine were great starts back in late 2007 and early 2008, it’s looking more and more like 2008 is going to end with a bang. The whole team is energized and going strong.

Keep checking back here for updates as we get closer to our new release.