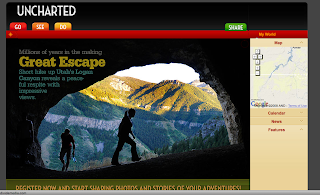 Meet “Thedude.” He’s 28, likes politics, traveling and running rivers. His favorite place on Earth is the Grand Canyon. Before he dies, he wants to hitchhike from Argentina to the U.S. and raft the Nile. “I lived in a tent (In Moab, Utah) with my dog for six months,” he writes, “I don’t recommend using that as a pickup line.”

I hope he can live out those dreams––in fact, I’m counting on it. He’s just one of the many interesting people you can meet on Uncharted. People with their own set of travels and adventures, often right in their own backyards. People who have been there, done that, and can steer you in the right direction. And people who can show you places that are truly uncharted.

At Uncharted, we love exploring new places and meeting new people. Even more than that, we want to share those experiences, ours and yours, one journey at a time.

Over two weeks ago, you joined us in making that dream come alive as Uncharted became the first Geo-Social Media Agency in the world. So, you’re probably thinking, “What’s Geo-Social Media anyway?” If you haven’t heard that term before, it’s not surprising, because we recently invented it. Simply put, it’s the mix of professional journalism with an online community, a community of friends sharing their own experiences through visuals and the written word, presenting that material geographically.

And that’s exactly what has happened. In just a matter of days, you’ve shared adventures from Hong Kong to Hawaii, California to Idaho, Michigan to New York, Europe to India. Now, anyone, anywhere in the world can click on a map and experience the globe behind the geography through your eyes.

And it hasn’t gone unnoticed. People from 19 different countries, speaking a variety of languages, have viewed your submissions. It’s been featured on blogs, other websites and carried through the air on radio waves. And your audience is growing every day.

So, this week we’re excited to share with you yet another story from our staff––this time, written and photographed by me, on one of Northern Utah’s geologic marvels, the Wind Caves.

And while I spent considerable time writing and taking photos for this story, I realize that, in a way, it’s not complete. It’s still missing one thing––your photos, your stories and your experiences. So, for those of you who’ve been to the Wind Caves, don’t let our story get in the way of you sharing your own as well, because that’s what Uncharted is all about––bringing the world closer together one journey at a time.