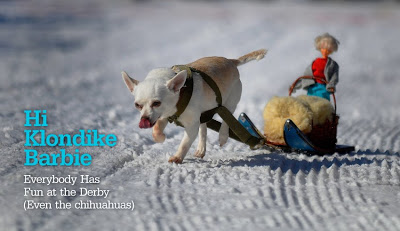 As we sat around the kitchen table, Alan eating the second half of his Big Juds burger, John crunching away at a cup of half-cooked ramen noodles, and me sitting there looking hung over even though I hadn’t touched a drop of alcohol, the discussion was this: How can we make all of our workdays like today?

This was our workday:

Up at 6, out the door by 6:45. Snowmobile suits, snow pants, parkas, gloves and hats help us to ward off the chilly weather, with temperatures hovering at a mere 6 above zero. Shortly after 7 am, we weaved through the snow-ridden streets of Ashton, Idaho, trying to find a place to park. Then we wander the streets with the sun rising in our faces as we talk to the owners of dogs set to compete in the American Dog Derby, featured on our home page today. Between the twin tasks of putting booties on his dogs’ feet and cleaning up their messes with a small rake and shovel, Bino Fowler of Sunriver, Oregon, told us why he loves sled dog racing. Up the street and around the corner are two dozen other contestants, likely with similar stories.

As the racers leave town one by one, we’re all pleasantly surprised by the easy, friendly manner of the Ashtonites we bump into. When we say hello, nobody turns the cold shoulder. They’re happy to be in this little town, awake so early in the cold. With a few sentences of explanation of who we are and what Uncharted is, we’re given the same insider tips these friendly folk give most everyone with a camera and a question. We follow it, along highways east of town and through banks of snow that force themselves into Alan’s shoes, making his socks soggy.

Nobody treats us as if we were interlopers. This is significant. Both Alan and I have worked for newspapers, and are used to bracing ourselves for the expected comments: You work for the paper, eh? Well, don’t screw it up. We might still screw it up, because newspapers do not corner the market on infallibility. But we’ll do our best. And have fun doing it.

So at the table, having lunch at about 2 pm, we ask ourselves: When will this become our full-time occupation? When will we be able to wake up in the morning and have Uncharted be our full-time, paying gig, not the part-time, volunteer gig it is now? We had fun. We want more of that. Someday soon, we hope. Someday soon.

Of course we’ve got a lot of work to do between now and then. We’ve got to get more agile. More mobile. More integrated with the folks we want to connect with. We’re working on it. And we expect great things to happen.

A Taste of the Uncharted Lifestyle