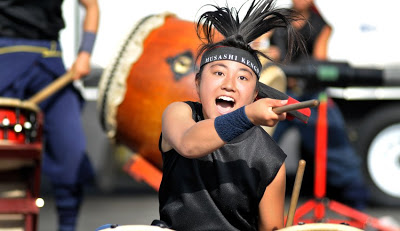 The rumbling thunderstorm and rushing breeze mix their sounds with those of Main Street.

Main Street noises, though, are not the swoosh of cars, the occasional click of a bicycle wheel, the regular shuffling stamp of pedestrian feet. From around the corner of the brick-fronted jewelry store, in the center of the street, emerges a woman carrying the black-on-white, yin with yang flag of South Korea. Behind her, pushed as if they were leaves on the growing breeze, a knot of reedy dancers clad in pink and aquamarine silken clothing, ruffled by the breeze, buffeted, as it seems, by the tloing! tloing! doing! crash! zloing bloing! of the drums and cymbals carried by the similarly-clad band, some of whom growl away on recorders, adding the drill and trill to the cacophony of clashes, accompanied by the swirling dancers, the rumble of thunder and the rush of the wind.

This is the Idaho International Folk Dance and Music Festival, in full swing for its twenty-fourth year. The festival has its roots at Ricks College, a private school – now Brigham Young University-Idaho – in Rexburg. In 1983, a team of folk dancers from the school attended a dance festival in Europe and decided to stage such an event at home. Partnered with the Rexburg Chamber of Commerce, organizers brought the first folk dance festival to town in 1986. You can read more about the festival’s history here if you like.

During the festival, Rexburg is gently taken over by the dancers, musicians and their entourages. It’s common to run into them at Kmart or Wal-Mart, shopping with the local families who host them – providing room, board and companionship – during the festival. During the festival week it’s as common to hear German or Mandarin Chinese being spoken frequently, loudly and punctuated with laughter as the dancers eat burgers at McDonalds or ice cream at the Dairy Queen. This is how you know it’s festival time.

It’s a great event. Go read about it at www.uncharted.net. And thanks.