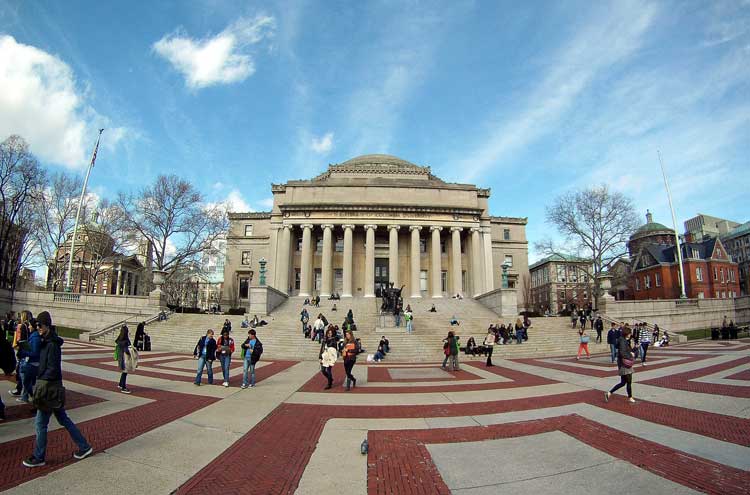 It’s a place with an impressive pedigree. It’s a home to Nobel laureates Theodore Roosevelt, Milton Freedman and Enrico Fermi; admitted spies Whittaker Chambers and Harry Dexter White; the moguls Warren Buffet and David O. Selznick. It brought us Isaac Asimov, author of I, Robot, and Paul Gallico, author of The Poseidon Adventure. It brought us the likes of Upton Sinclair and Art Garfunkel, William “The Princess Bride” Goldman and Benjamin “Not that Spock” Spock. And, in 1984, it brought the world a shushing, ghostly librarian and Drs. Egon Spangler, Ray Stantz and Peter Venkman, who has PhDs in psychology and parapsychology.

It’s New York City’s storied Columbia University. And this Monday, Uncharted’s own Alan Murray, our benevolent founder and despot, will walk the same granite stairways and gaze upon the same verdant greenswards as these famous folk.

He is, despite his eastern upbringing – he’s a Pennsylvania native – a little flummoxed. “I’m hoping they all think I’m the CEO of Uncharted the video game,” he says. “That way, maybe more than 30 people will show up, only to be disappointed to find out I am a bum.”

The “they” of whom he speaks are high school students and their advisors; the “what” is the Columbia Scholastic Press Association’s annual fall conference where, this year, presenters representing the fields of digital media, media law, newspaper and magazine journalism, photography, social media and Internet production and others will offer 98 presentations to students hoping to improve their skills in communication and make their high school and private school publications the envy of the universe.

Alan is one of those to whom the students will flock to partake of wisdom. On Monday, Nov. 2, he’ll present on “Geo-Social Media for an Uncharted Era.” He’ll focus on how students (and business) can communicate more effectively and work as teams to save money and time producing web publications.

“I’m really excited to be teaching this fall,” Alan says. “I spent most of my high school years attending conferences like this one. These events aren’t possible without the many qualified professionals who donate their talent and time to make the event a success. It’s nice to be able to do what others did for me when I was a student.”

The conference is among the most venerable student journalism conferences held in the United States. It’s sponsored by the Columbia Scholastic Press Association, which was founded in 1925 and formed to “unite student editors and faculty advisers working with them to produce student newspapers, magazines, yearbooks and online media,” according to the association’s Web site. (The online stuff, obviously, came a bit later than 1925.) Students from all over the United States and from overseas attend the conference as part of the education in communications, journalism, web production, photography, and writing.

Other presenters this year will teach students how to write effective editorials, take prize-winning photos, produce video for Internet delivery, explore the ins and outs of how social media can help them strengthen their publications and, from Alan, learn how to use inexpensive or free digital tools to enhance their publication’s presence on the web.

We at Uncharted wish Alan the best of luck.