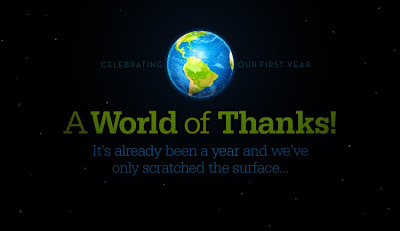 A year ago, if I mentioned Uncharted, you likely would’ve asked me what I was talking about. We were used to blank faces when Uncharted came up in conversation. Most of our friends were surprised to see that this wasn’t just another practical joke, but a real, legitimate, functioning site.

And a year later, we are pleased to see a little less of that blank look when Uncharted comes up in conversation. We’re even more pleased when we run into people all over the country who have seen us around. And we love it when we see someone wearing our t-shirts or driving around with an Uncharted bumper sticker.

Last year, many of you joined with us to unveil www.uncharted.net as the world’s first geo-social media network. That’s geo-social media. It’s more than just our staff sharing their adventures with you, it’s you sharing your adventures with us and each other. It’s more than just linking up with friends from around the world, it’s working with those friends to explore the world together. It’s not just a web site, it’s the people who explore, live, and feel their unique corner of the globe and share it with everyone else. It’s a community of friends.

And so the Uncharted Adventure began with a handful of professionals from a variety of disciplines, anything from a guy selling pink bunny pajamas out of his basement, to an engineer developing bio fuels, to an officer in the Air Force. And we have our share of journalists, photographers, programmers and designers too. They all work full-time jobs. Uncharted is what they do for fun on their own time. We’re grateful to the many employers who allow each member of our growing team to be involved.

And we’ve come a long way.

If you were among those who visited Uncharted on our first day, you would’ve seen three stories photographed and written by us. Back then, there were only a few people making up the Uncharted Community. Our audience was smaller, only two countries and a half dozen states.

Now, we’re viewed by each of the 50 states and over 90 countries, speaking 54 different languages. Uncharted has been featured on the radio, in magazines, and a variety of other publications. Members of our team have been guest presenters at colleges and universities, including Columbia University’s Columbia Scholastic Press Association national convention. We even sponsored one team member as he competed on the national level in orienteering.

And it’s not just us sharing anymore. Now, there are 130 explorers signed up for the journey. Last year, explorers Lisa Wheat, Xelashayand Fishstyx garnered a spot on our home page for their submissions from the Bahamas and Southern Utah respectively.

It’s also easier to find us too. More and more, we’re rising to the top in Internet search results and we have over 80 fans on our Facebook page, where Uncharted Explorers and our audience alike can receive updates and behind-the-scenes info on our progress and where Uncharted is headed in the future.

When we launched, the site didn’t allow our community to communicate with each other like we had envisioned. Now, thanks to our development team, users can choose some basic notification preferences that make it easier to connect with people from around the globe. We’re grateful for the invaluable feedback that many of you provided, paving the way for these improvements. We look forward to hearing any other suggestions you may have for the coming year.

To celebrate our first full year, we thought we’d highlight some of our favorite adventures and share some behind-the-scenes photos of our team making Uncharted what it is today, a community of friends dedicated to discovering the world one journey at a time.

And the adventure continues. We have big plans for 2010 and we’re excited to discover and rediscover the world, your corner and ours. There are countless places to go and even more people to meet. Our development team is hard at work to make it easier for you to share your adventures and link up with those who can help you find those out-of-the-way places, people and cultures just waiting to be discovered. So, check it out here. Come and join us as we continue the adventure.