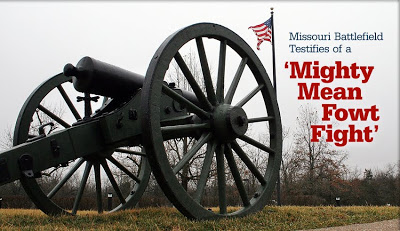 I am, it has to be said, a war buff. World War II, if you want to get specific, though I’ll read just about anything about any war, from World War I to the Cuban Missile Crisis.
The Civil War, too, is of interest, certainly because of brave men like Abraham Lincoln and Robert E. Lee, insitgators like Harriet Beecher Stowe, characters like John Brown, and the shame of Jim Crow. So to walk these battlefields — Gettysburg, Arlington, and others — is solemn. Introspective. And fills one with thankfulness that all is quiet at these sites today.
That’s what Uncharted staffer John Milligan discovered in Missouri, exploring the battlefield at Bloody Hill, Wilson’s Creek, Missouri. Men died there, where groomed grass and placards stand. Men fought there, where the visitors center stands and where the flag flaps. It’s holy ground. It’s part of our uncharted legacy.
A Mighty Mean Fowt Fight