Peaceful spot in the French Pyrenees defies a violent past 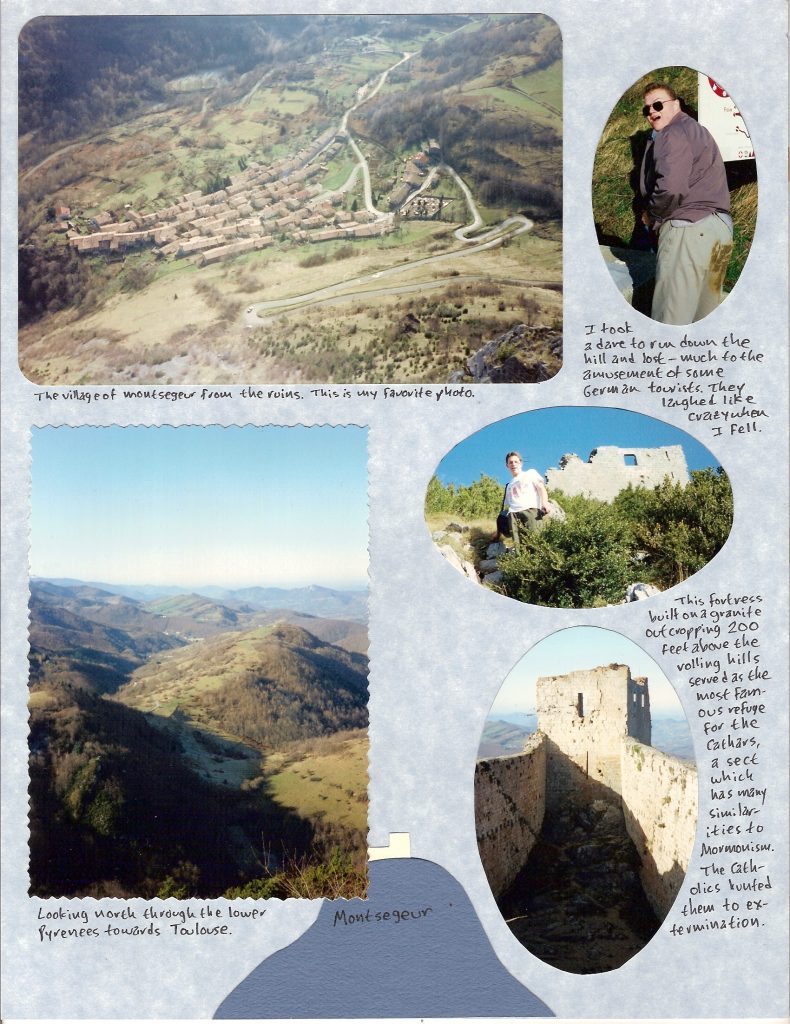 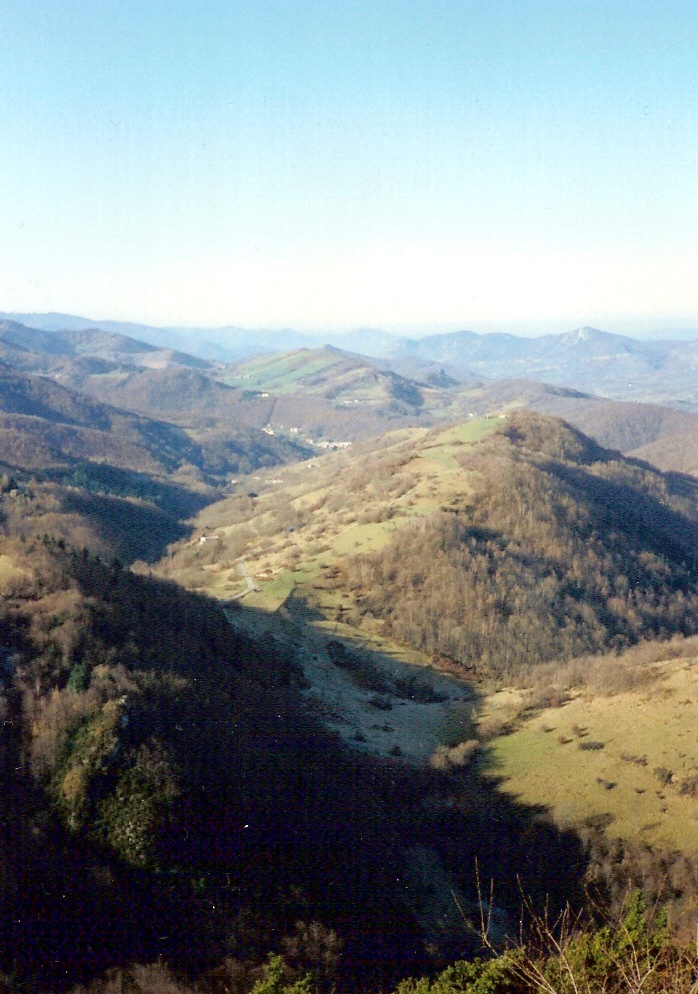 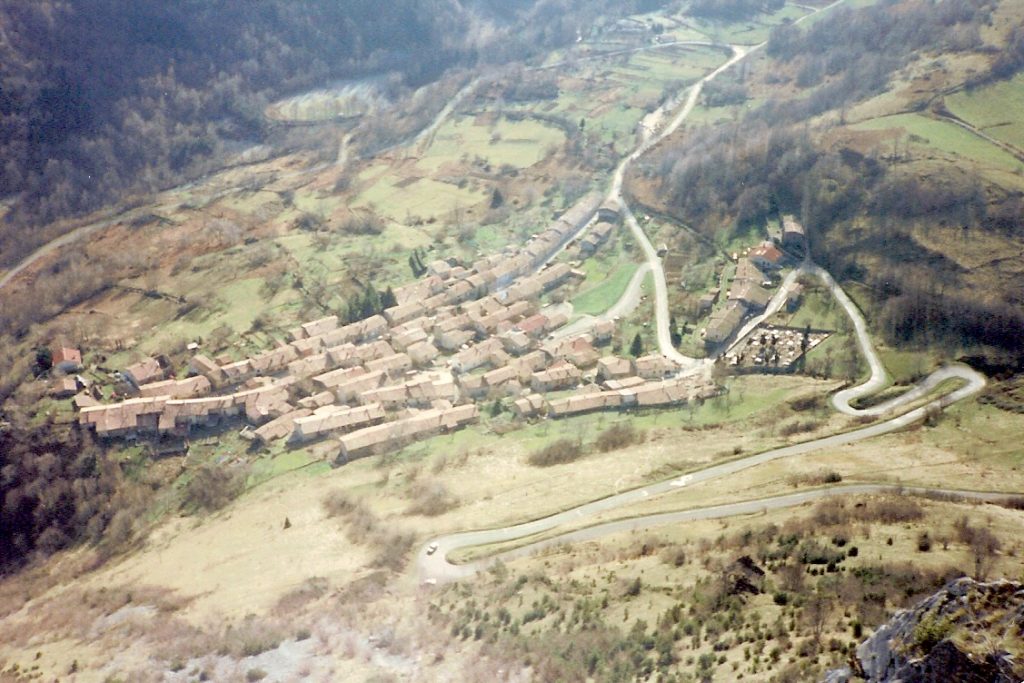 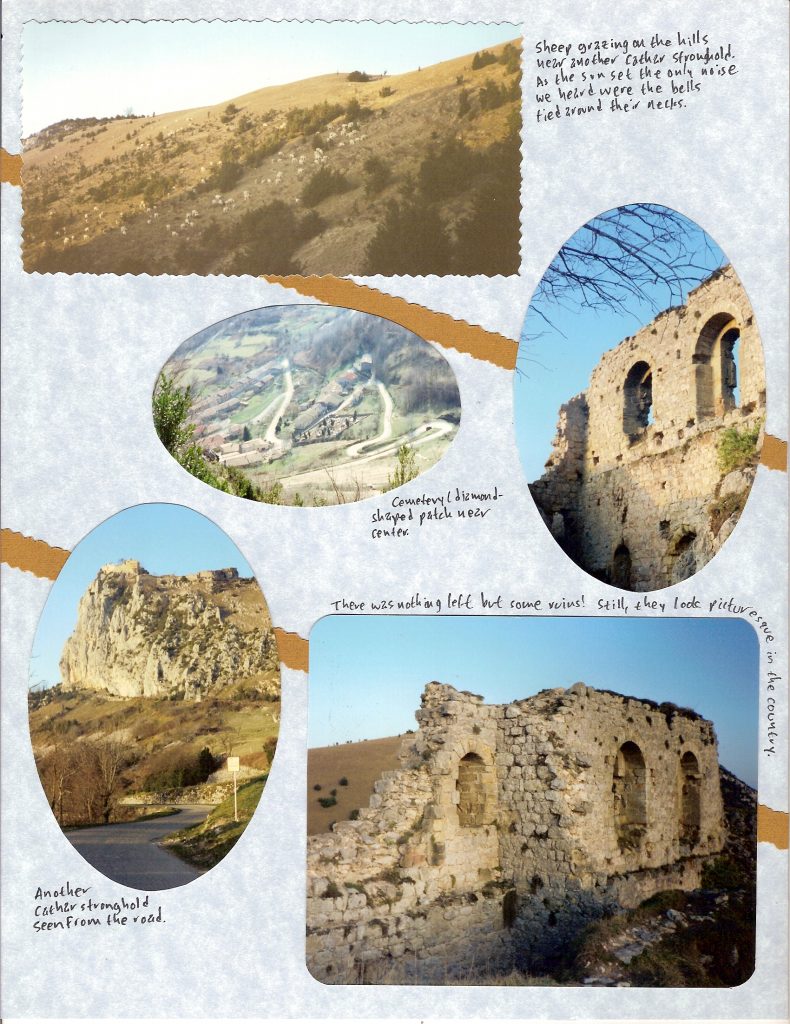 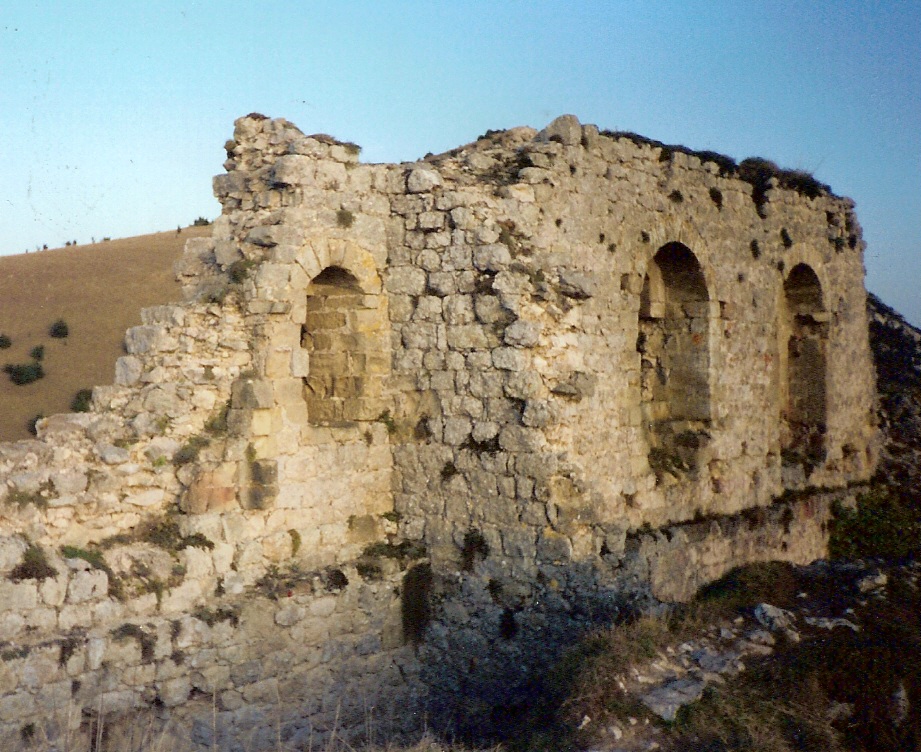 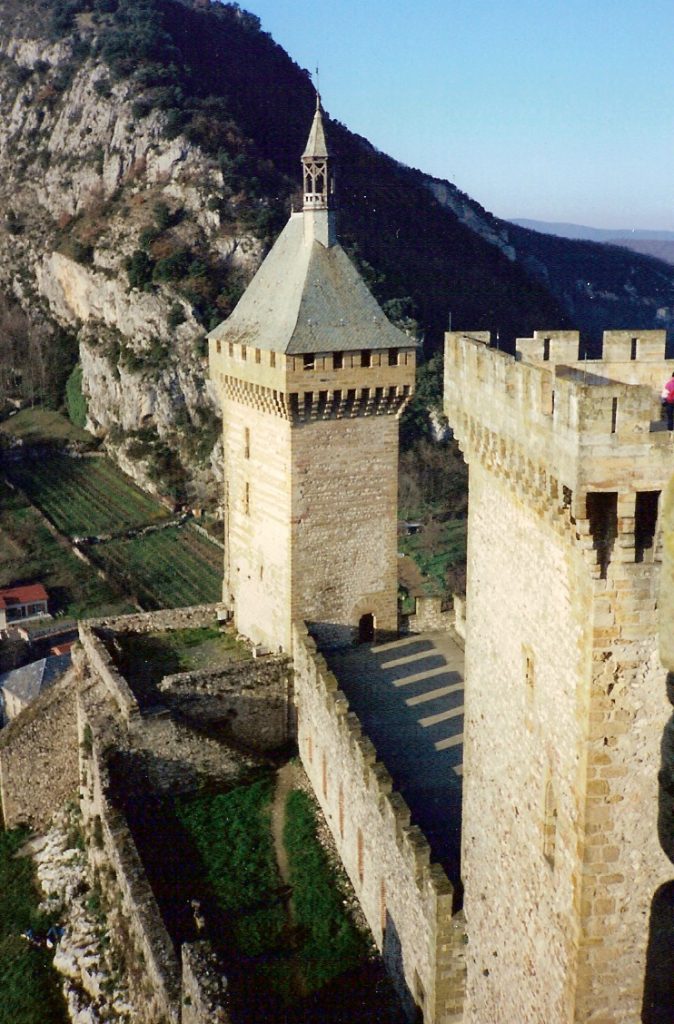 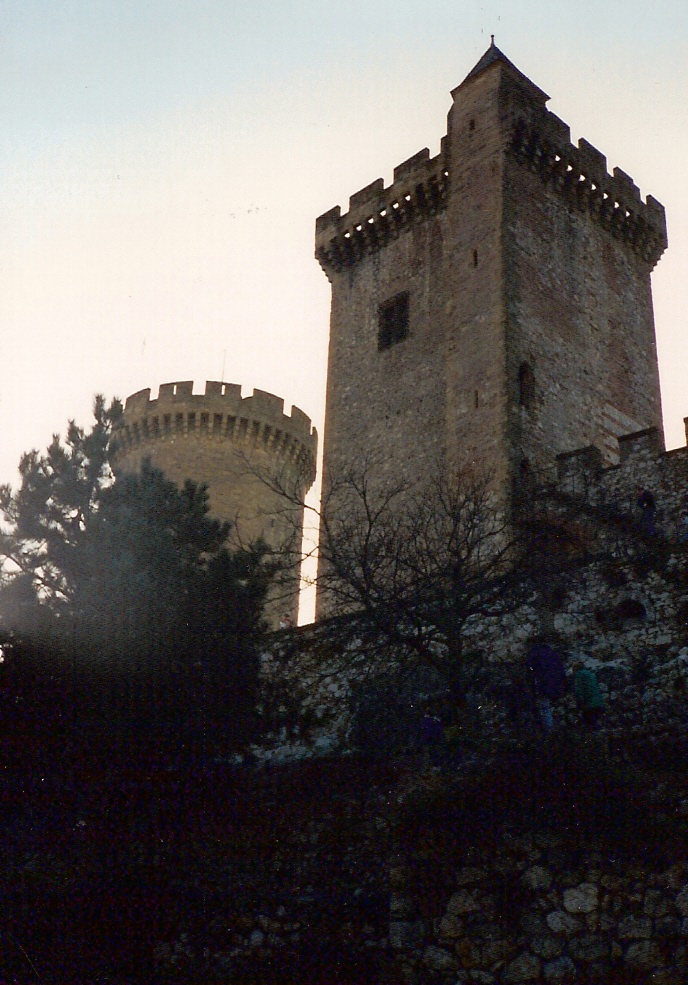 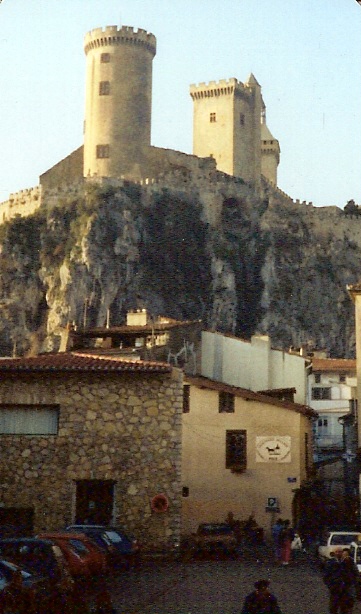 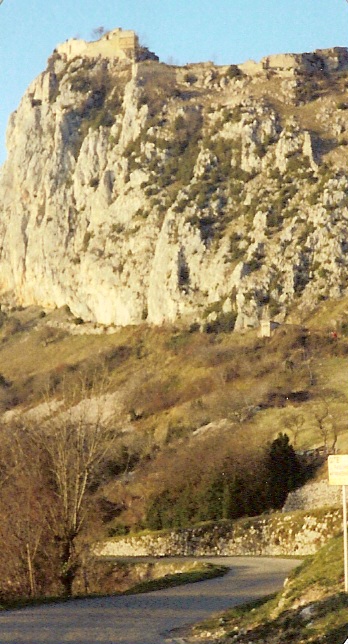 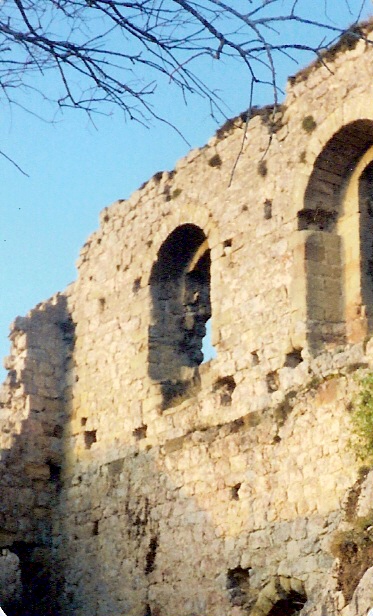 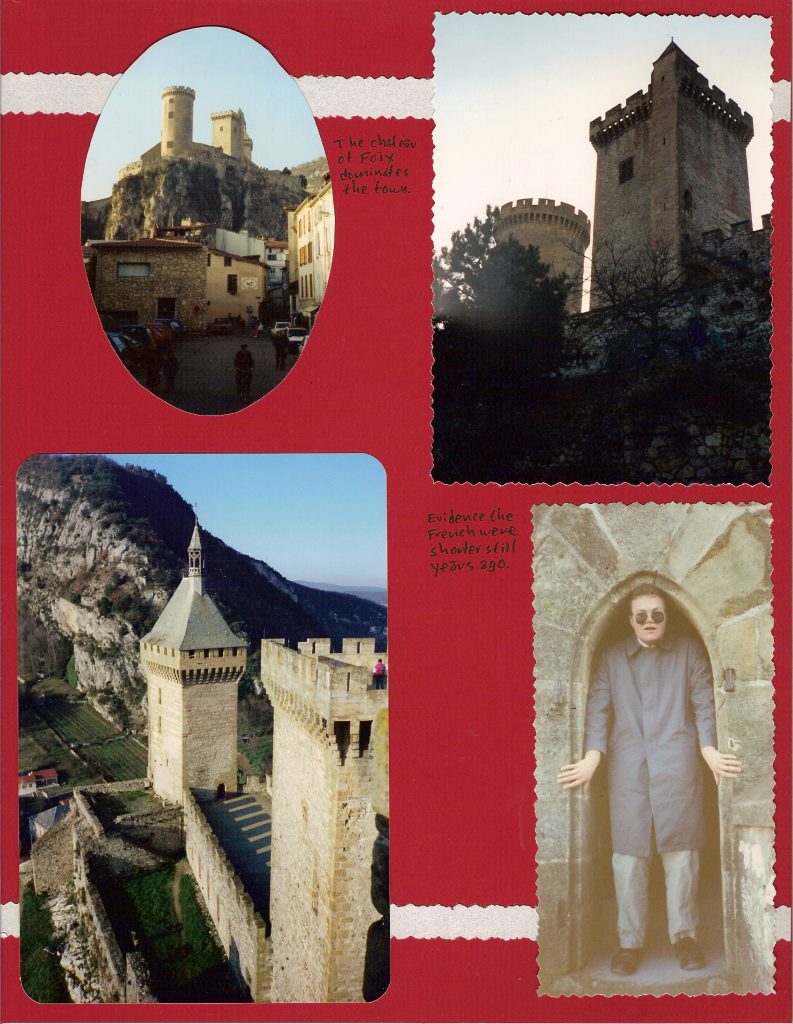 From the top of Montsegur, the rolling hills of the Pyrenees stretch into southern France.
From the "pog," -- mountaintop -- where the ruins of the chateau of Montsegur perches, the village of Montsegur looks like a collection of toys. The village sports the red tile roofs typical of southern France.
After the Cathars were killed, the conquerors built a new chateau on their hilltop -- but it, too, has fallen into ruin.
As the sun set, we could hear the tinkling of bells -- in this case, bells tied around the necks of sheep grazing on the crazily-steep hillside.
From one of the castle towers, it's easy to see that the Chateau de Foix was built as a defensive measure, with outer walls, inner walls and observation towers.
Foix towers loom over the city as you approach the castle.
Evidence here that the builders of Foix didn't exactly count on tall folks walking through every door in the castle unstooped.
The Chateau de Foix, in the general neighborhood of Montsegur, perches atop a hill that dominates the town of the same name. This castle is another fine example of southern France's medieval architecture.
From the village of Montsegur, ruins of the chateau atop the hill almost look like just another rock formation.
Rumor has it that at the vernal equinox, when the sun rises it shines through one window of the ruined chateau and out the other. Archaeologists scoff that the chateau was built with that intention, as the sun often shines th
By Brian

We sat on rocks scattered about the mountaintop, watching the sun set in the cooling air. Below in the valley filling with dark like a cast-iron pot, a flock of sheep wandered, baa-ing, tin bells tied to their necks tinkling in the growing darkness. A tiny breeze brought the sound of the bells to our ears, mixing bells and baas with the breath of nature, a world at peace.

It’s easy to forget we’re God’s children when we descend into the noise and tumult of the world. Each side to every argument screaming from a thousand televisions, radios, newspapers, computers. When the voices get too shrill, I take myself back to that blissful moment atop the mountain of Montsegur and contemplate a life wandering among the foothills, peaks and pogs of the Pyrenees on the border between France and Spain, tending sheep, a little garden, as a medievalist living in modern times.

I think of that peaceful half hour perched atop Montsegur, ruins of a chateau perched with me, and want to go back.

Montsegur – “Mount Secure,” in the old Occitan dialect of French – however, paid dearly for its modern peace. The Cathars, a religious sect considered heretical by the Catholic Church, sought refuge atop the peak and built a small keep, a small village, where they hoped to live out their lives and their religion in peace. In the winter of 1243-44, however, the mountain was laid siege by 10,000 French troops loyal to the Catholic Church and its inhabitants starved out. At the end of the siege, more than 200 Cathars were burned alive at the base of the mountain after they refused to renounce their faith. Their dwellings were burned and their keep destroyed so no two stones lay together. So thoroughly was their keep destroyed, modern archaeology has been unable to find a trace of it.

Cathars maintained a hierarchy in their religion, but rebelled against the idea of priesthood and of meeting in church buildings. They believed in reincarnation, did not eat meat or animal products and were strict in adhering to their interpretation of the Bible, which called for living in poverty, telling the truth, forbidding the taking of oaths and forbidding the taking of lives.

Cathars also refused to pay tithing to the Catholic church and openly ridiculed local church leaders. They also attracted a great number of followers. Pope Innocent III, incensed at their insolence, launched the Abigensian Crusade against the Cathars. Historians believe that between 1208 and mid-century, more than 500,000 Catholics and Cathars in the Pyrenees were killed, including the last holdouts of the faith at Montsegur.

The peace at the peak of Montsegur belies this bloody history. The ruins currently atop the peak are a mere 400 years old, likely built from stones from the keep the Cathars used. Nearby, foundations of the Cathar village are visible, revealing how closely-knit the villagers were, with foundations for tiny houses and shops overlapping each other like raindrops. From the top of the peak, the Pyrenees lie to the south. To the north at the base of the hill lies the village of Montsegur, its buildings, sporting the cheerful red roof tiles common to the south of France, lining a twisted road.

As I sit atop the peak again in my dreams, I imagine the feel of the wind on my face, the sound of the bleats and bells of the sheep, perhaps this time mixing with an ancient, gentle song of nonsense and peace sung by a shepherd, to amuse himself and calm his sheep:

That’s the romantic in me.

But underneath, echoing through the rocks and scrub trees and ruined walls, I know beneath the shepherd’s gentle song, I’ll hear something else:

At night, an elite troupe
With climbing feet, good sense of smell, good eyesight, good hearing
Clambers from rock to rock
By a secret path a native showed them for a few pennies.
The sentry, sleeping, is killed with a knife-stroke.
A whistle blows!
It’s the signal to clean the castle grounds with the sword!
The clank of metal, the screams of the skirmish mix
with the shrill cries of women and children suddenly quieted.
When the sun rises, the last Cathars of Midi are mourning.

That’s the realist in me, knowing that beneath the romance, I’m sitting on ground made holy by the blood of those who died for their beliefs.

Montsegur is considered a “Grail Castle” by historians and mythologists concerned with tracing the Holy Grail. The legend is during the siege of 1243-44, a handful of Cathars escaped the castle with a “treasure” among which was supposed to be the cup of Christ. So persistent is that legend that during World War II, Nazi Germany searched for the grail in the Montsegur area and supposedly flew airplanes in the pattern of swastikas or Celtic crosses over the peak on the 700th anniversary of the chateau’s capture in 1944.

The current chateau is built in a way that on the day of the summer solstice, rays from the rising sun shine through one chateau window and out another, leading some to believe the building was designed by sun worshippers. Most archaeologists, however, sum that up to coincidence, as it’s unlikely sun worshippers would have had a hand in building the chateau in heavily-Catholic France.

The French word “pog” is used only in the south of France and has its roots in the old Occitan words “pueg” or “puog,” meaning “hill,” “peak,” or “mountain.”

“The Shepherd’s Song” is a traditional song of the Auvergne region of France, originally sung in the same Occitan language spoken at Montsegur. The song, and others, have been popularized by French composer Joseph Canteloube.

The poem “Montsegur” was written by H. Robert Conte.