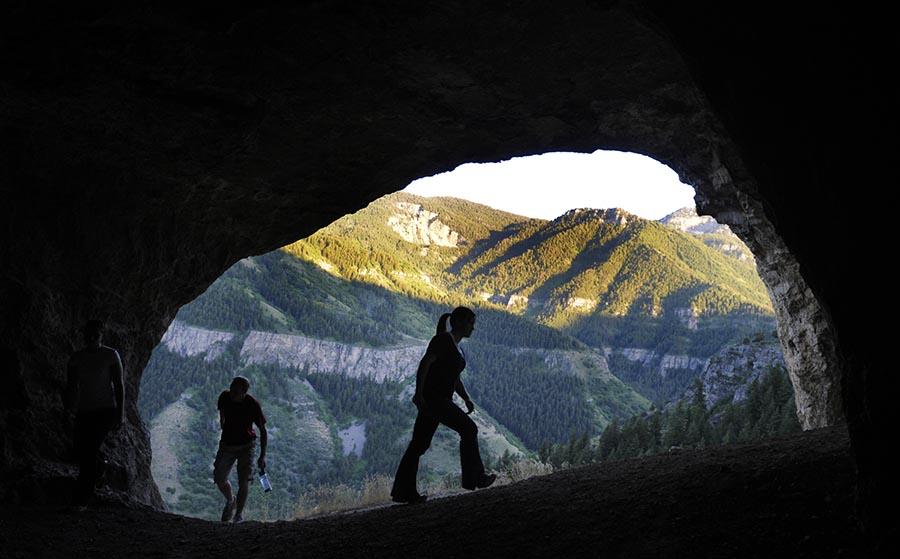 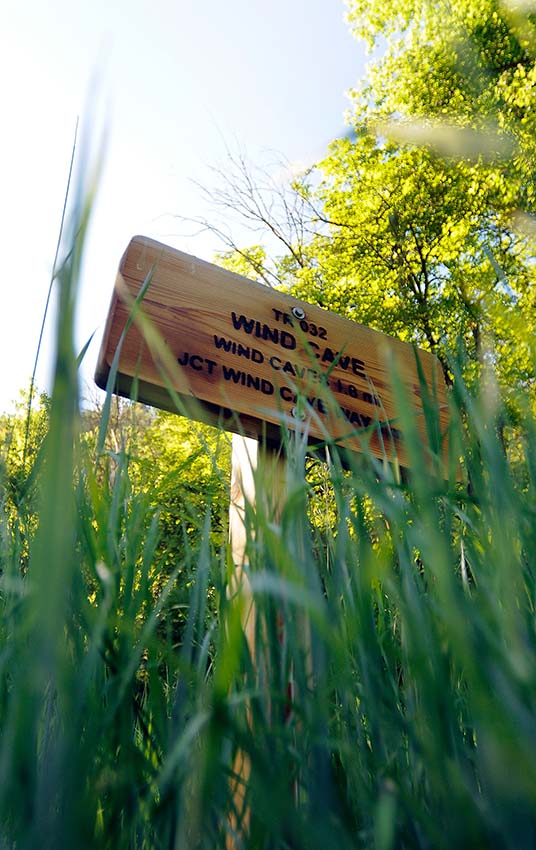 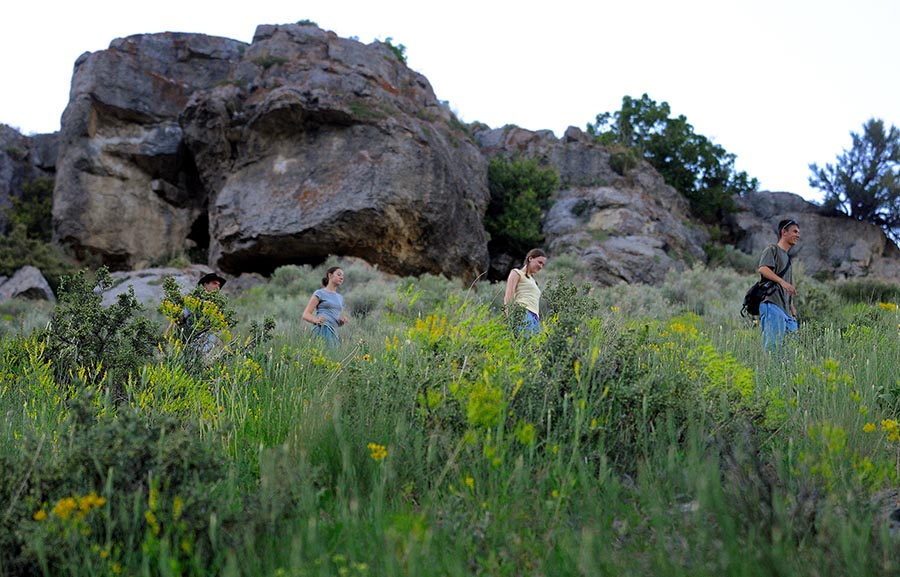 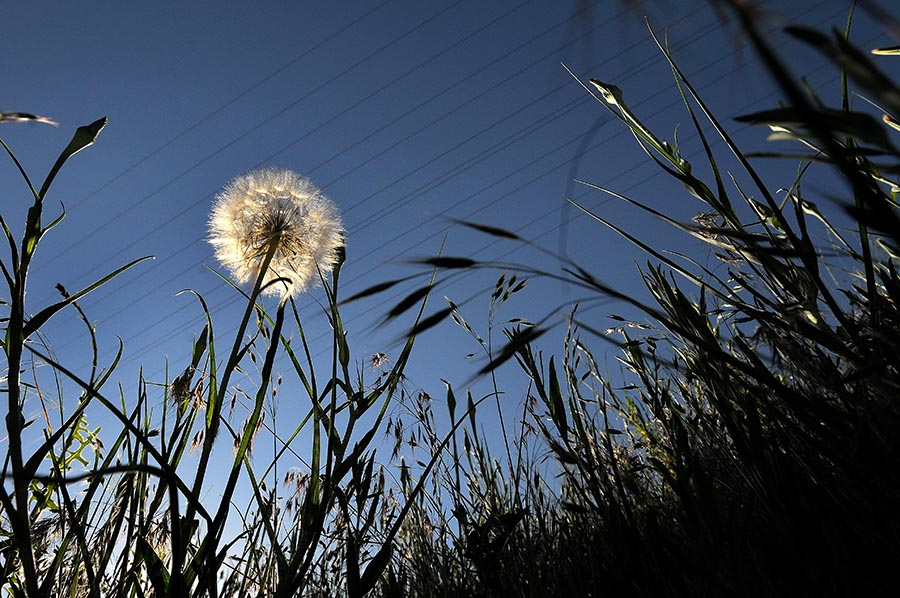 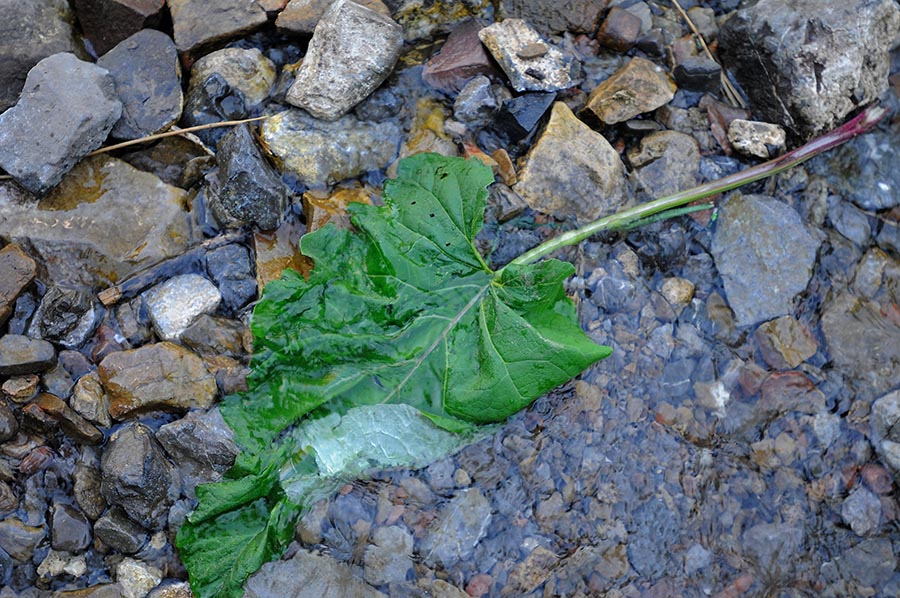 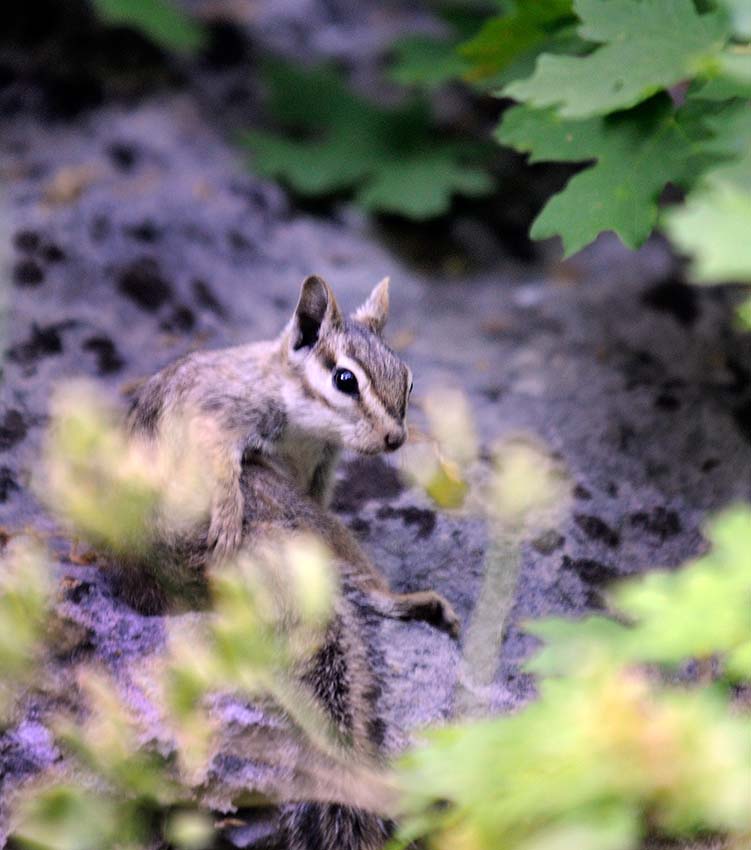 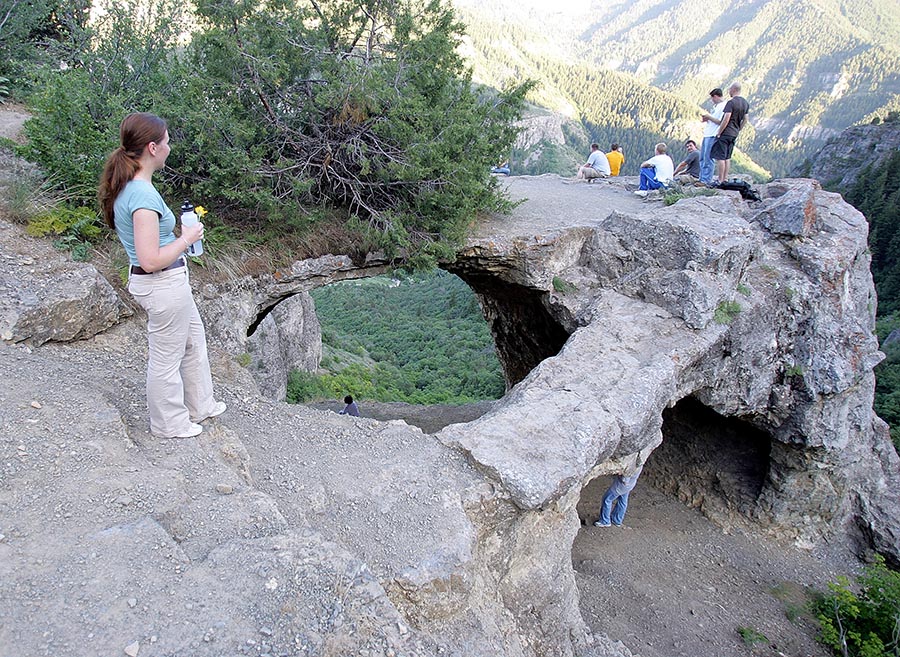 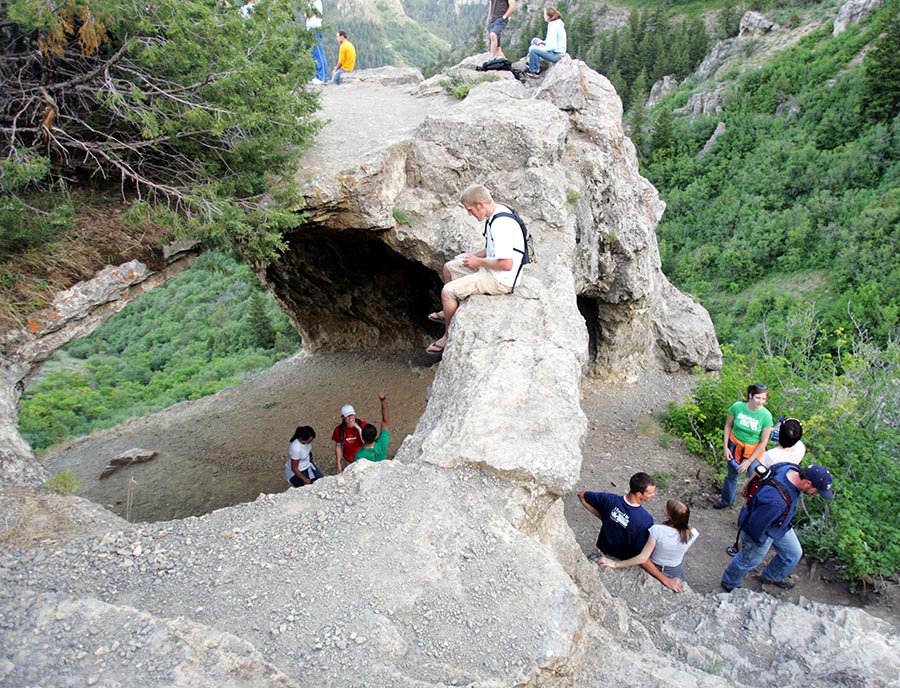 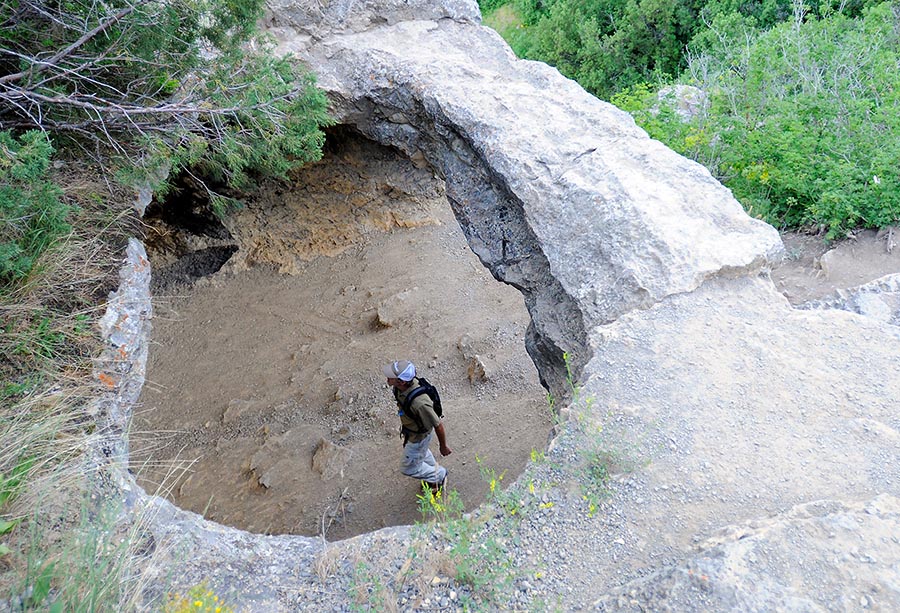 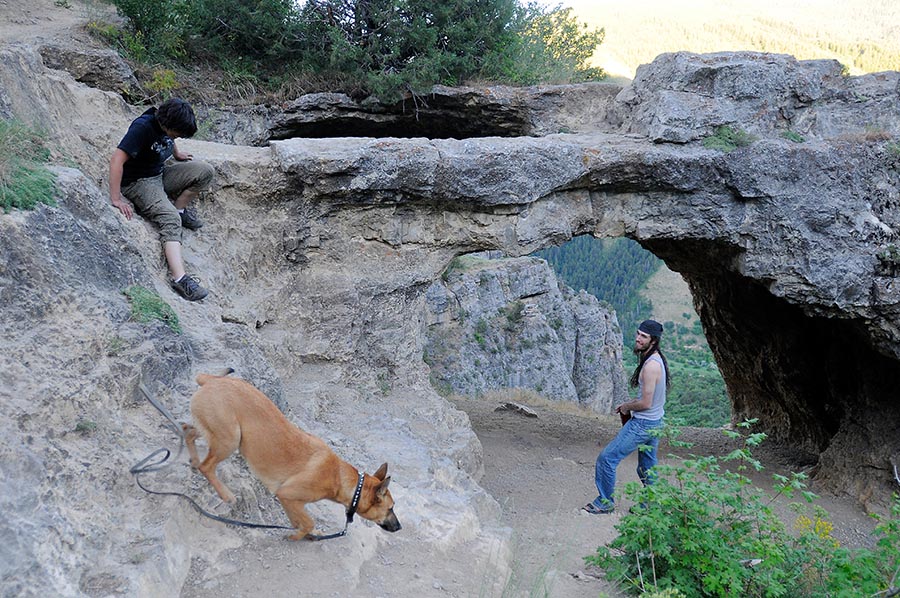 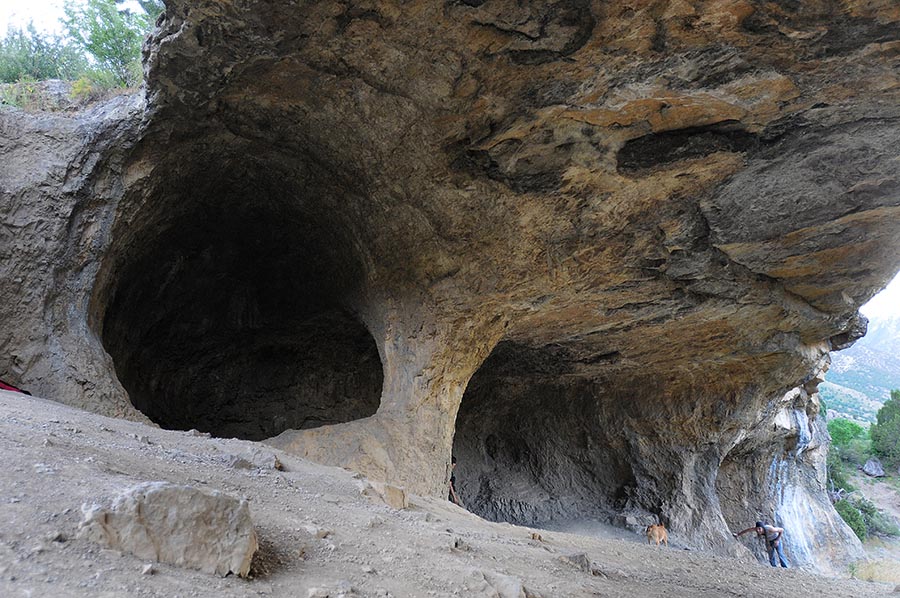 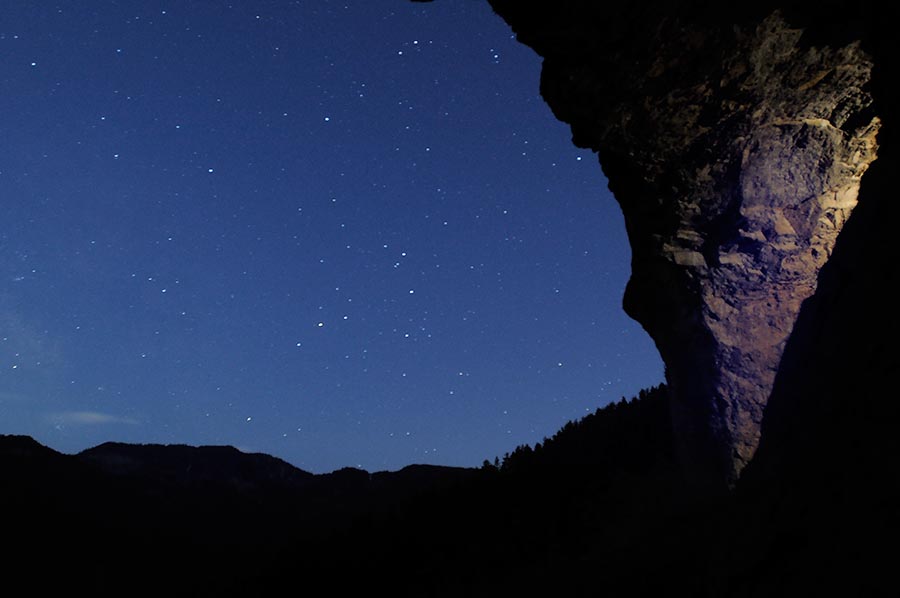 Water, insect repellant, a flashlight, first-aid kid and a lunch.

The trail climbs 900 feet in 1.84 miles with a starting elevation 5100 feet and ending at 6000 feet, but it's a doable hike for most people. Summer hikes can be hot so the best time to go is in the morning or late evening. If their is a visible moon, some of the hike can be done without a flashlight and this makes it easier to see stars.

The dark form of a lone hiker delicately steps across a narrow bridge, part of a rounded opening through limestone wall, the result of millennia of water – water long since vanished – seeping through cracks far underground over millions of years, leaving a marvel of aquatic-carved architecture on the mountain’s edge. A soft breeze cools the air as the setting sun’s reddish rays signal dawn in the Northern Utah sky over this fortress of solitude in Wasatch-Cache National Forest.

The light chirp of crickets mingled with birds, echoes through this delicate triple arch and natural cave known to locals as Witch’s Castle or Wind Cave. But ascending this geologic wonder isn’t as hard as one might think. No ropes, caribiners, helmets, or harnesses are needed. And It doesn’t take days or even hours to get there––just a short 30 to 45 minute hike, only six miles from Logan.

And all kinds of people of varied abilities visit each year. Justin Nafziger has been around. His rough wavy goatee, dark braided hair and black beanie give him a European flare and a well-traveled look. He’s hiked the backcountry overseas; but he still makes time for this less rigorous, almost leisurely hike, near home. “It's got a good view and it gets you out away from things. You can really get into the woods a bit without necessarily packing a pack or devoting the entire day to it,” he says.

And he’s visited the caves over 20 times, pointing out how easy it is to get away from town with little planning and effort. “That’s my favorite part of this. You can just be spur of the moment and go up right now.” This time he’s with a friend from out of town, Julianne Ramanujam and her dog, Switch. It’s Julianne’s first time to the caves. They walk across a narrow strip of limestone. Switch looks down. He hesitates, looking for another way. After a moment, and some coaxing from Julianne, the brown German Shepherd darts safely to the other side and follows down into the cave. “This is awesome,” shouts Julianne. “Are there more caves?” she asks as they approach the edge. The two sit for hours, chatting and watching the setting sun.

The caves may not be exactly what most people expect, however. They began underground. Water, over millions of years, seeped through cracks, dissolving limestone, revealing them to the open air. Instead of dark cavernous corridors deep within, they became open formations on the mountainside, allowing for plenty of sunlight and a commanding view of the canyon. Logan Ranger District’s Connie McCaughey says, “People just need to know its not like a cavern that you walk into with your flash light. They're just open formations that water has carved out. If they're going expecting to go down in this deep dark hole it's not like that at all,” she says.

Below, a group of college students begin their ascent, walking single file up the narrow trail. The hum of cars from the highway clash with the sound of a shallow stream of water flowing down the mountainside across the trail. “I hiked a ton here with the Girl Scouts. It's neat because there's something cool at the top of it,” says Chelsea Wood. The group continues into a wooded area.

Not more than a few feet from the trail, the rustle of leaves reveals a tiny chipmunk. It freezes, waits patiently as they pass, then scrambles back into the trees. Hikers may also be missing more than chipmunks. Utah State University geologist Sue Morgan points out that, “if they look closely at some of the limestone, the grey rock along the trail, there are fossils in the rocks.” These relics of marine life from over 300 million years ago, tell of a time, before towering mountains and dry land, ruled by a vast ocean. And the area is lush with wildflowers––yellow violets, scarlet Gilia, mountain bluebells and asters, all patch the mountainside with color, as the trail makes its gradual but steady upward climb.

A series of three switchbacks make the ascent less dramatic. Ambitious hikers, too hurried to take in the fine detail of the trail, created their own paths, cutting up the mountainside. Signs posted by the Forest Service warn hikers to stay on the trail, pointing out that these “short cuts” are eroding the mountainside.

On the other side of the canyon, tiny ant-like figures of hikers slowly traverse a wall of rock stretching across the mountainside. Better known as China Wall, this Mississippian Lodgepole Limestone Deposit is some 350 million years old, now forming part of the four-mile Crimson Trail which can be accessed through Spring Hollow campground, some five miles into Logan Canyon.

And the trail makes for a fine evening hike too. “It's a great night hike with a full moon,” says Nafziger. “It’s not complex enough that people who haven't spent enough time in the woods are risking anything at all. It’s an amazing chance to see stuff at night." Back at the cave, stars, one by one, dot the sky, illuminating the now darkened opening filled by a clouded night, as flashlights outline its limestone frame. Below, unheard, barely seen cars hurry through the canyon unaware of this quiet, almost dreamy, place of solitude.

Water, insect repellant, a flashlight, first-aid kid and a lunch.

The trail climbs 900 feet in 1.84 miles with a starting elevation 5100 feet and ending at 6000 feet, but it's a doable hike for most people. Summer hikes can be hot so the best time to go is in the morning or late evening. If their is a visible moon, some of the hike can be done without a flashlight and this makes it easier to see stars.